Sport
Starting your own football team

How to set up a soccer team is a questioned often asked. Football is the most popular sport in the world. Watched and played by millions of people every day, there are a number of reasons why this sport has a huge appeal. For some people, that is the social aspect that attracts them. For some, remaining active is their primary priority. Then there are individuals whose competitive spirit is where their affinity for sport originates.

The first step is to come up with a unique name. The club’s name is a crucial part of its identity, giving an idea of the personality types possessed by the people who build and run the club. All good things have to start somewhere, which for a football club you have to decide what it’s going to be called. This is a sacred part of the team’s DNA that lives longer than the personnel who inhabit the club at any given time.For this reason alone, long life must be remembered. Your club’s name must reflect the values ​​that your club wants to maintain throughout its existence. There should also be a reference to the location in the name to strongly rooting your club in a certain area.

A club symbol and colours are as important as its name. It is part of visual makeup that allows others to identify among countless other clubs. Again, there is an opportunity there to flex your creative muscles and produce a design that is time-resistant and uniquely reflects the spirit of your club.

When starting a soccer team, a manager, secretary, and treasurer are deemed indispensable by all grassroots football teams. They largely unify the responsibilities of work found at the professional level. Amateur football is built on the hard work and commitment of those involved. Without the work of these individuals both on and off the pitch, the club will not survive.

When thinking about how to start a soccer team, one of the most important aspects is the players. After you have filed all the essential official documentation for your club, it’s time to find a few players. The best action is to hold a trial session, which allows players to show their talents before being chosen for your team.

But before you can do any trials, you need to know exactly what you are looking for.

These criteria can include, but are not limited to:

For positive results, organization is key. The players present expect discipline and preparation from those in charge – the same quality as you would expect from the players present. If you don’t seem to know what you are doing, that alone is enough to prevent players from joining your team.If you are new to training, take a look at the excellent Soccer Drills videos from https://www.sportplan.net/drills/Soccer/ 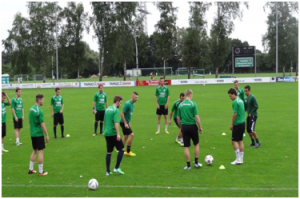 Once you have placed the important senior officials to your board, you are prepared to make it official. Linking your club with the District Football Association and registering yourself in the league in the local area is very important. This is the first of numerous costs your club must bear before anyone has even kicked a ball.