Located in County Antrim, this castle dates back to 1625. It’s said to be haunted by Lady Isabella, the wife of James Shaw, who built the castle. 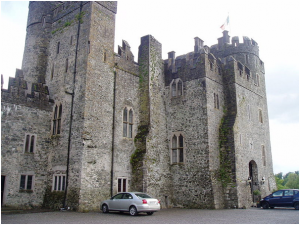 This County Kildare castle was built in 1181 by Sir Walter de Riddlesford and is supposedly haunted by the Wizard Earl, the nickname for the 11th Earl of Kildare, who lived in the castle in the 16th century. He is said to sleep in the moat and appear once every seven years.

Be sure to wrap up warm if you go ghost hunting, as the Kildare weather can be cold and windy. Something like a men’s crew neck Aran sweater, such as one from https://www.shamrockgift.com/traditional-mens-crew-neck-Aran-sweater, is perfect.

Clonony Castle can be found in County Offaly. Built in the 1500s by the MacCoughlan clan, the castle was eventually given to Henry VIII in the 17th century. He, in turn, gave it to Thomas Boleyn, father of Anne. After Henry lost interest in his wife Anne, many of the Boleyn family were exiled to the castle in Ireland. It is not known who the ghost is, but it is a male figure who appears surrounded by an eerie glow.

This County Westmeath castle has stood since 1780 and was heavily renovated in 1830. It was once owned by a cousin of Sir Walter Raleigh, Benjamin Chapman. The ghost that haunts this castle is believed to be Benjamin Chapman’s land steward from the 18th century. The steward is believed to have cheated Chapman out of a large amount of money. He was said to have drunk himself to death using the money he stole. Legend has it he can still be seen roaming the castle grounds. Restoration of this stunning castle began in 2000, according to the official site.

The County Dublin castle was built in 1738 by the Reverend Robert Taylor, who apparently paid workers in accommodation and whiskey! The castle is said to be haunted by the ghost of Louisa Connolly, a friend of the Taylor family. Louisa went swimming on a cold winter day but drowned in the rough conditions. Her ghost is said to appear on the stairs to the castle.